This way to the future – Canadian TMT Predictions 2012 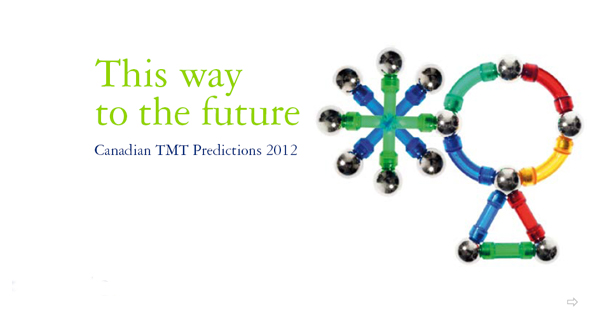 Somewhat surprisingly, Canadian consumers will continue to watch 95 percent of programs live or within 24 hours of broadcast in 2012. This viewing habit is virtually unchanged from a decade ago, despite new devices that allow them to record programs and watch them whenever they want. The rise of social networks has enhanced, rather than diminished, the schedule’s appeal as online discussion and commentary on programs has expanded from the living room to a continental community. Maybe we’re hardwired to prefer routine, maybe we enjoy the “event” aspect of television or maybe we just find choosing a chore. Whatever the reason, Canadians are sticking to the schedule. And this habit is causing conventional broadcasters to be more creative in showing advertisers the advantages of building their campaigns within the context of that schedule.