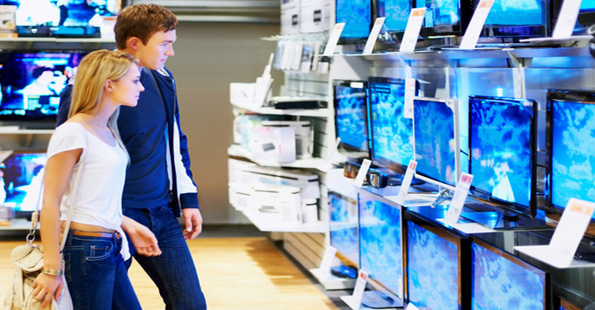 More 4K ultra-HD (UHD) TV sets were shipped in Q2’14 than shipped all year in 2013. According to the NPD DisplaySearch Quarterly Global TV Shipment and Forecast Report, 2.1 million sets were shipped in Q2, compared to 1.6 million in 2013. Brands introduced their 2014 model ranges in Q2, with a clear focus on 4K as the “must-have” consumer feature for high-end television viewing.
With the introduction of the 2014 models, the shipment balance by region has shifted. In 2013 China accounted for approximately 80% of shipments in each quarter, as Chinese brands introduced low-priced 4K TVs. However, in China there were few sources of 4K UHD content, and TV brands were largely marketing the higher pixel count to consumers. New 4K TV models from global brands have been introduced in every region this year, and there has lately been an increase in 4K UHD content available from streaming providers. A result of the regional shift is that China’s share of 4K TV shipments dipped to 60%, though as supply chains are filled there is likely to be some over-shipment relative to demand outside the Chinese market. “New 4K TV model introductions have broadened the 4K TV business, which has become a lot like the high-end TV market, in general,” said Paul Gray, director of European research for NPD DisplaySearch. “Even so, there needs to be greater implementation of broadcast offerings that deepen the value of 4K sets, beyond pixel counts.”
DisplaySearch will examine the 4K TV ecosystem in more detail at its upcoming IFA DisplaySearch Business Conference in Berlin on September 8, 2014; Paul Gray will also be speaking at the SMPTE UHD event at the IBC2014 Exhibition in Amsterdam on September 14, 2014.
The NPD DisplaySearch Quarterly Global TV Shipment and Forecast Report covers the entire range of TV products shipped worldwide and regionally, and it offers the industry’s most comprehensive coverage of the TV market. For more information, please contact Charles Camaroto at 888-436-7673 or 516-625-2452, e-mail contact@displaysearch.com, or contact your regional NPD DisplaySearch office in China, Japan, Korea or Taiwan.
> En savoir +