Where Do Americans Watch TV? Hint: No, Not on Mobile
New data shows strong consumer preference for traditional big screen

TV viewers have an abundance of devices at their disposal to watch content whenever and however they want. But in the US, the big screen is still their preferred access point.

That conclusion was underscored by data from market research firm Hub Research. It surveyed 2,026 US TV viewers ages 16 to 74 who had broadband access at home and watched at least 5 hours of TV per week.

Hub found that most TV content is being watched on a TV screen, rather than a smartphone, tablet or desktop computer. Indeed, when combined, set-top boxes, TV connectors and smart apps accounted for roughly three-quarters of total TV viewing.

Device Share of Total TV Viewing According to US TV Viewers, April 2017 (% of total) 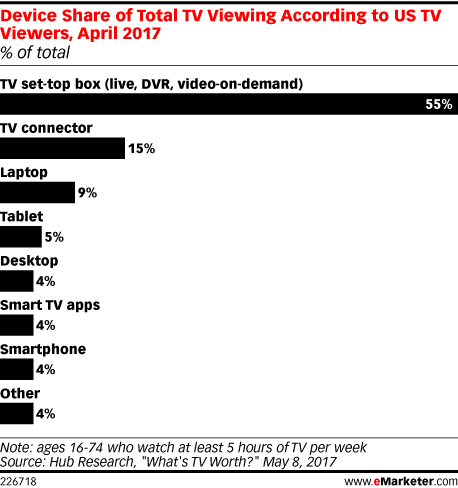 The Hub survey data was released not long after a surprising Accenture study that came to a strikingly different conclusion. That study, which surveyed 26,000 internet users ages 14 and older worldwide, found a sharp drop of people who said they preferred to watch TV shows the traditional way, on a TV.

A key difference between the two surveys was geographic focus: Hub surveyed US consumers; the Accenture survey was global. Still, it points up the unsettled state of video viewing and the rapid evolution of options available to consumers.

Regardless of which device people are using to consume content, the digital video audience is growing. eMarketer estimates more than 62% of the world’s internet users will view digital video in 2017, up from 60.8% in 2016.