London, 23 February 2017: TV ad revenue in the UK totaled £5.28 billion in 2016, up 0.2% on 2015, according to full year revenue figures provided to Thinkbox by the UK commercial TV broadcasters. This represents the seventh consecutive year that TV advertising revenue has grown in the UK, albeit dampened by the business uncertainty caused by the vote to leave the EU.

The figure represents all the money invested by advertisers in commercial TV across all formats and on every screen: linear spot and sponsorship, Broadcaster VOD, and product placement. 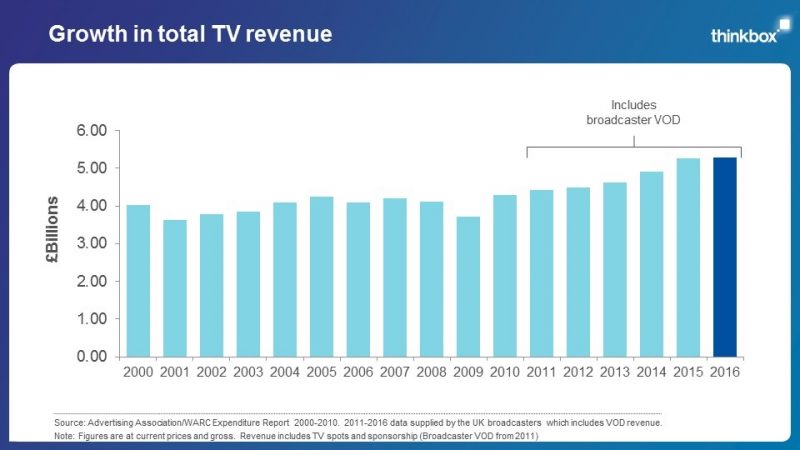 Online businesses are now the biggest advertisers on TV

Based on 2016 data from Nielsen, online businesses* – including brands such as Amazon, Confused.com, Facebook, Google, Just Eat, Netflix and Purplebricks.com – invested a total of £639 million in TV, an increase of 8% on 2015. The top 5 categories on TV according to Nielsen’s data were: 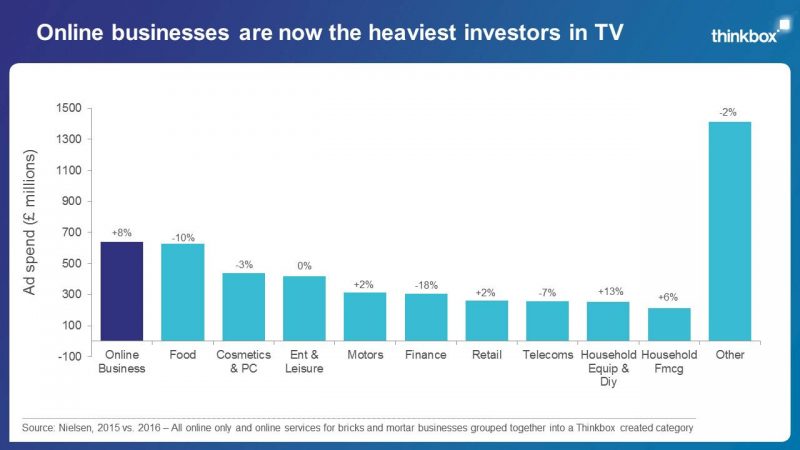 837 new or returning advertisers on TV

This figure reflects the number of brands who went on TV for the first time or returned to TV after no TV advertising for at least five years.  Notable newcomers included Accor Hotels, Thorntons, Huawei Technologies and David Lloyd Leisure Group. Together, new or returning advertisers accounted for 1.6% of total TV ad revenue in 2016, according to Nielsen.

Procter & Gamble was the most viewed advertiser

According to data from the Broadcasters’ Audience Research Board (BARB), Procter & Gamble was the most viewed TV advertiser in 2016 with 34.8 billion views on TV, 14% more than in 2015**. The top 5 advertisers/holding companies were:

TV advertising forecast to grow in 2017

TV advertising is 28% cheaper than 10 years ago

Despite some recent inflation in TV advertising prices due in part to increased advertiser demand and some decline in TV set viewing, in 2016 TV advertising was 28% cheaper in real terms than 10 years ago.

TV advertising facts at a glance:

Lindsey Clay Chief Executive of Thinkbox « Advertisers invest in TV because it works. TV is a trusted environment for brands. It is a place they want to be seen, where they can rub shoulders with high quality shows that are important parts of people’s lives. Its trustworthiness and quality are two of the reasons why TV is the most effective form of advertising. “TV advertising creates huge effects instantly as well as building and maintaining profitable brands for the long-term. For online brands in particular, which have little or no physical presence, TV’s ability to create emotional connections with  large audiences is vital. It helps make them feel less virtual and more real. »